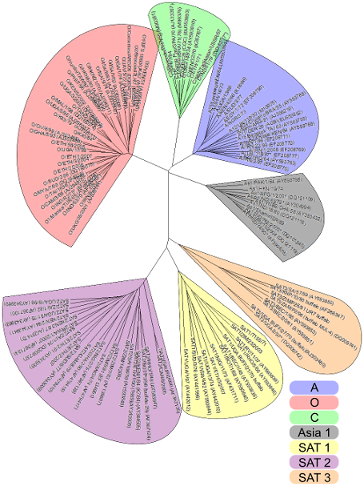 In 1922 Vallée and Carré demonstrated that there were two serotypes of FMDV (Vallée & Carré, 1922). They named these Vallée O and Vallée A, after the regions they orginated from (department of Oise in France and Germany [Allemagne in French]). Four years later Waldmann and Trautwein demonstrated the existance of three serotypes (Waldmann & Trautwein, 1926). Which they named Waldmann A, B and C. Waldmann A and Waldmann B were found to be the same as Vallée O and Vallée A, respectively. While Waldmann C remained as a distinct third serotype. The names of Vallée O, Vallée A and Waldmann C were later shortened to O, A and C.

How to write foot-and-mouth disease virus

The International Committee on Taxonomy of Viruses (ICTV) gives advice on how to write virus species names in it's Frequently Asked Questions.ICTV website

When writing down the combination of serotype, tototype and lineage of a strain of foot-and-mouth disease virus the FMDV Nomenclature Working Group suggests the following format:

The serotype, abreviated topotype and lineage in this order, each seperated by a forward slash (/). If there is a sub-lineage it is appended to the Lineage as a superscript:

Serotypes should always be written in  upper case. The exception to this is Asia 1, which is written in lower case with an upper case A.

For the SAT 1 to 3 serotypes and Asia 1 there should be space between the letters and the number.

Topotypes are written in  upper case.

Abbreviations for the topotpyes (shown in brackets below) are written in upper case.

There are a wide range of lineage names and no single way of writing them all. Please write them in line with how they are written in our table of strains for prototype strains.